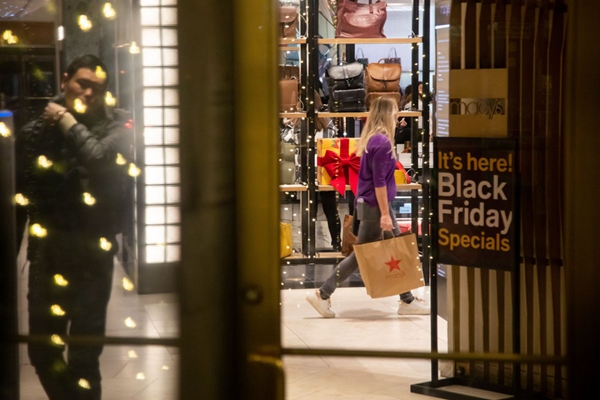 Black Friday, the Friday immediately after Thanksgiving, usually kicks off a yearly sales event in the United States, putting the holiday shopping season in full

This year, however, consumers strained by record high inflation have become more careful about spending.

"I've been more on a budget this year than in years past, so I'm more mindful of prices at this time," Jennifer Sabin, a sound engineer from New York, told Xinhua on Friday.

"I'm definitely spending less money on everything this year trying to save," she said as she finished shopping at the flagship Macy's department store, along with her family members Jessick Sabin and Dax Sabin.

With elevated prices for food, rent, gasoline and other household costs taking a toll on wallets, consumers are very selective about what they buy. Many shoppers are holding off on big purchases like cars, televisions and appliances.

"I'm looking for the best deals," said Jessick, adding she has sought ways to save money this year, such as "getting items that are refurbished" instead of brand-new ones.

The Sabins also said they had no plan to purchase any large items, adding "we're working with what we already have currently and not going for anything new at this time."

"I have not been shopping as much as I did last year," since "everything is so much more expensive this year," a retail employee from Washington D.C. identified herself as Casey, told Xinhua.

The 22-year-old said she "would rather go on a vacation" to enjoy experiences than "spend money on stuff this year" due to higher prices.

"We don't really spend a lot... we are very careful in order to look for great deals," said Rosa, a retired realtor from Georgia state. "We just purchase what we need and not extra stuff."

A combination of soaring consumer prices, rising borrowing costs and growing odds of a recession in the world's largest economy have been weighing on consumer confidence.

"Consumer sentiment is near historic lows," Joanne Hsu, director of the University of Michigan's Surveys of Consumers, told Xinhua.

She said consumers are still willing to spend during the holiday shopping season, but they have adapted to high prices by cutting back on things with particularly large price increases and may gravitate to lower cost items than they might have in previous years.

A report by BlackFriday.com found that 70 percent of shoppers will be taking inflation into consideration when shopping this holiday season and even more will be on the lookout for deals.

Respondents said they plan to spend, on average, around 700 U.S. dollars this holiday season, substantially less than the roughly 880 dollars consumers spent during each of the past three holiday seasons, it revealed.

"Consumers believe we are in a recession, and they behave accordingly," Ayalla Ruvio, associate professor at Michigan State University and co-head of the study, told Xinhua.

"Over half of them indicated that they are very or extremely concerned about inflation," she said. "They take different measures to minimize the effect of inflation on their holiday shopping, and this may translate to decreased holiday season sales."

Consumers are feeling much more hesitant given inflation and growing economic concerns, and the retail landscape is looking bleaker, according to experts.

Against the current economic backdrop, many U.S. retailers have leaned in early by starting their holiday sales in early fall this year. Amazon held a second Prime Day event in October; others like Walmart and Target also held competing savings events.

Despite their tremendous efforts to lure consumers, many companies were unsure about the prospects.

In mid-November, Target warned of a gloomy outlook for the holiday quarter with surging inflation hitting sales as it announced plans to save up to 3 billion dollars in cost cuts to shore up profits.

Apparel companies across the board are cautious about expectations for the fourth quarter, citing an uncertain environment and declining sales activity in late October and early November.

Forecasts from some trade groups and industry watchers indicated a more challenging holiday ahead for retailers.

The U.S. National Retail Federation expected holiday sales during November and December to rise between 6 percent and 8 percent from last year, a sharp slowdown from the 13.5 percent growth in 2021. Those figures aren't adjusted for inflation, meaning that real spending could even be down from a year ago.

"It will be interesting to see if consumers will succeed with their plans to control spending. If they do, holiday sales will be less than optimal," said Ruvio.

"An increase in sales of less than 8 percent will indicate a drop in sales considering inflation," she noted.

The U.S. holiday shopping season is considered as a key barometer of shoppers' willingness to spend. The two-month period between Thanksgiving and Christmas represents about 20 percent of the retail industry's annual sales.