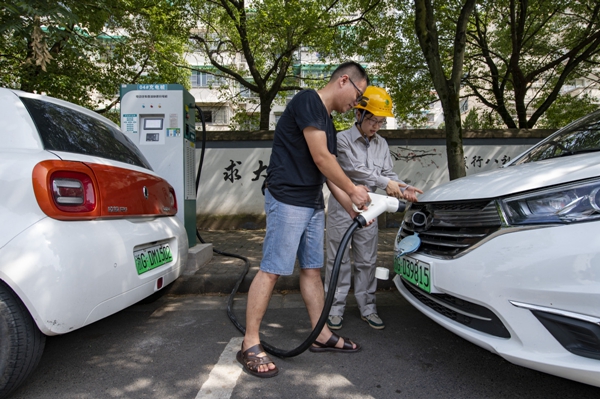 The business of the

company, with a registered capital of 60 million yuan ($8.34 million), also includes new energy vehicle accessories sales, power transmissions, distribution and control equipment manufacturing, as well as the manufacture and sales of photovoltaic equipment and components, according to Tianyancha, a corporate information-sharing site.

The company said earlier that it aims to build over 1,000 charging stations by 2025 in China, having built 203 as of September.

An analyst said China's energy giants have been expanding their investment in low-carbon businesses including renewables, hydrogen and electric mobility to further facilitate the country's goal of achieving carbon neutrality by 2060.

Wei Hanyang, a power market analyst at BloombergNEF, said CNPC has selected a wise route to go green by targeting renewable energy to benchmark with global oil majors and competitors.

NEVs will eventually replace internal combustion engines in the China market, and if left behind in this transition, oil companies can lose their competitive edge over the long term, Wei said.

The JV, Shanghai Jieneng Zhidian New Energy Technology, is expected to set up about 40 battery swapping stations in cities such as Shanghai and Beijing as well as Guangdong province's Guangzhou and Shenzhen this year. The aim is to put about 300 such stations into operation by the end of 2023 and about 3,000 by 2025.

The firm will also research swappable battery technology as well as provide big data services with its business focusing on leasing power batteries, according to official business registration portal www.qcc.com.

Luo Zuoxian, head of intelligence and research at the Sinopec Economics and Development Research Institute, said domestic oil majors have been stepping up development of new energy assets in recent years, while their widespread gas stations nationwide also give them an edge as pioneers in the new energy industry.

The oil majors can not only provide physical sites, but also take over the supply of clean energy via battery swapping based on their existing filling station networks, and they should further extend the industry chain of new energy transportation, including developing hydrogen refueling stations, Luo said.

Sinopec and CNPC aim to switch to new energies and transform petrol stations into "integrated energy service stations" where drivers can either charge or swap their vehicles' batteries.